Why Lego Worlds is more than just ‘minifig Minecraft’ 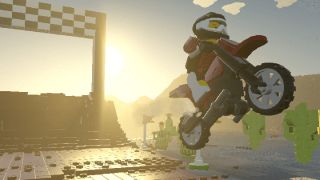 After nearly two years of development, Lego finally has its very own sandbox building game called Lego Worlds on Xbox One, PC, and PS4.

Considering the Lego brand is so heavily associated with making and creating and the company is hardly new to the world of video games, it seems odd that we’re now only just seeing a creativity-focused game like Lego Worlds being released.

We sat down with the game’s associate producer Chris Rose to ask just why it’s taken developer TT Games so long to enter the open world building genre, how the game stands apart from its competitors, and what we can expect to see from it in the future.

We decided to get the obvious question out of the way first, and asked Rose how he feels about the natural comparisons to Minecraft – the unparalleled gaming success story that, at least initially, took its cues from the Lego toys.

“It’s not just Minecraft” Rose told us “there are a lot of building type games out there now […] we understand that we’re always going to get comparisons to all of them.”

It’s interesting that Lego has allowed the creative building game market to become so busy before entering the fray itself. But according to Rose this was simply a matter of waiting for “the technology to catch up” with their plans.

Though this wait has allowed Minecraft to become arguably the market leader, Rose says it was a wait that was for the best as it’s allowed TT Games to develop their game in a way that helps it to stand out.

“I think some of the biggest differences is what we call the terrains,” said Rose.

“Things like the brick resolution. What we mean by that is obviously a lot of the building games are just cubes, giant boxes and cubes, where we’ve kind of waited for technology to kind of catch up with us a little bit and we’ve got lots of slopes and more natural looking formations as a result.

It’s paid off really well, I mean, the terrain generation has been the single biggest challenge and yet the most rewarding thing to see in action so that’s a really big difference. The world’s definitely a lot more natural than maybe we could have done a while ago, so it’s good that we’ve waited for the tech to catch up.”

Though it seems odd to think that something tied to the Lego brand would wait to achieve more natural rather than blockish shapes – the words “Lego” and “block” are basically synonymous – Rose is right in saying that it helps the game visually stand apart from its main competition.

Not only that, he says the Lego brand always has its distinct sense of humor behind it.

“I think what’s good is that we’ve kept our humor. It’s one of our biggest things. Every time we make a game we say: where’s the humor? A lot of the character and creature animations are very funny.

“The ostrich in particular. When someone rides on the back of that they do a sort of [makes a bobbing motion] so that kind of humor was there. We’ve kept it like a normal Lego game but we’ve also made enough differences from the other building games out there to make it stand on its own, even within our own game library.”

Having seen the game in action for ourselves, we definitely can confirm it’s not just a Minecraft copy. It’s very distinctly “Lego” in its humor, color palette and general spirit and we agree with Chris when he says “it’s a brand that has changed so much and yet hasn’t changed at all.”

So, though it’s definitely not just another Minecraft build, did TT Games take any inspiration from existing building games when it was developing Lego Worlds? Not really, says Rose.

“To be honest one of our main inspirations was one of our older games itself. Lego Indiana Jones 2 has a level editor which was our kind of first foray into creation. It was one of the things we always said: how can we be more creative in the game? So we had Lego Indy 2 with this really cool level editor.

“Obviously it was limited because we’re talking [the PS2 console generation] so there’s only so much you can do without effectively running at maybe two frames a second.”

This was, however, he says “a really good first step” and another reason behind TT Games’ decision to “wait for the tech to catch up.”

“Generally speaking we’ve not looked too much at what everyone else is doing. We’ve just kind of know what we want to do. We’ll say ‘we’ve always wanted to do this so let’s do it.’”

Of course something notable about Lego Worlds is the fact that it’s not just about what TT Games wants to do. The game has been in development for two years and for a large chunk of this time the game has been in Steam Early Access.

It’s unusual for such a big title to be open to the gaming community for such a long period of its development, but TT Games insist it was a good decision.

“It’s been great” said Rose with genuine sincerity, “It’s unusual for us to put ourselves out there so much. It’s taken a bit of risk; people can be quite brutal on the internet so it’s like ‘okay well let’s see what this is like’ and actually, to be honest, they’ve been awesome. We’ve had a really really good community of people come along.”

They’ve had an impact on a huge number of things that are in the final release version of the game, too.

According to Rose, they’ve influenced huge elements such as the game’s camera.

“The game camera completely changed, effectively. We added a first person view and we’ve never done that before, really. Certainly not to the kind of scale where you’re able to run around the entire environment.”

Interestingly they also forced certain parts of the development process forward. Name, online multiplayer: “ Initially the idea was that it was going to be the last thing we added to the game when we came out of early access but [the community] were just ferocious for it so we thought let’s take a step back and do the multiplayer mode.”

The multiplayer mode at the moment is four player on PC and two player on console. The reason consoles have a lower player capacity is largely out of practicality and though the number might increase in the future it’s not certain just yet when.

“Console player numbers will stay at two players for now. We haven’t done it in a long time so we want to make sure it’s good and then we’ll look at expanding it later once we’re happy with the connection speeds everyone’s getting.”

Expanded multiplayer isn’t the only thing that could be added in the future, either.

“‘Even though the game is finished in a sense it’s not finished” Rose told us. TT Games’ plan is to release the game and after a month or so step back in and say “okay, what’s everyone saying? What needs fixing? What can we add? There’s a wall of ideas at the moment.”

Could Lego Batman or Lego Harry Potter be among these additions? It doesn’t look likely at the moment.

“There are a lot of IPs for Lego and we’ve tried to keep this very core to Lego so it’s just our own themes at the moment like Ninjago and City Creator.”

Though the game is out for PlayStation and Xbox now, it’ll also be coming to the Nintendo Switch in the future. Unfortunately, there’s not much to say on that front just yet.

“We’ve only just started so it’s still early. Very very early so we’re not really in a place to comment on that at the moment.”

“I have played a Switch – I played Lego City on the Switch and loved it. But we’ve only really just started looking at the Switch now so again it’s time to step back and say ‘right we’ve got this other thing to look at now.’”

Though Lego Worlds has now been released, it seems like the creation will continue for TT Games for a while to come. But that just seems in the spirit of the thing.

Why Lego Worlds is more than just ‘minifig Minecraft’

This site uses Akismet to reduce spam. Learn how your comment data is processed.